With the addition of two new breweries opening in Tucson in the past month (bringing our total to twelve), and more on the horizon, it’s evident that Tucson is taking shape as a major player in the craft beer revolution.

It also comes as no surprise that part of this movement is the rise of neighborhood bars featuring local craft brews. We’re seeing this manifest as combination craft beer bars and bottle shops.

These shops support the craft beer community with  heavy, beer geek delight tap lists, growlers to fill and take away, and bottle shops to order from in house or to take home.

Tucson’s new craft beer and bottle shops are community hubs for craft beer geeks. Thanks to the spread of these shops, folks will no longer have to travel far for good beer. Tap & Bottle set the bar high when Rebecca and Scott Safford opened the beloved craft beer and wine bar meets bottle shop. Inspired by what they saw in San Diego, the Pacific Northwest, as well as Time Market, Plaza Liquors, and 1702, Tap & Bottle provides 20 craft brews on tap, six keg wines on tap, and a bottle shop boasting an extensive selection of craft beers, ciders, and wines in bottles and cans. Customers can sample from the tap menu before ordering and enjoy anything from the bottle shop within the bar for a nominal cappage/corkage fee. You won’t find any televisions in T&B, but you will find a stack of old school board games to play. Human interaction is the emphasis here. The only food available within Tap & Bottle are the artisan snacks made locally, but food trucks routinely park at the front curb so you don’t have to wander far to grab a bite. The latest craft beer bar with bottle shop to open serves 33 taps of craft beer on Tucson’s east side. They, too, offer a vast selection of bottled beer, canned beer, and growlers to fill from the tap menu to take home and enjoy. Arizona Beer House doesn’t serve food with the exception of free popcorn, but features local food trucks out front on select nights. This is not a sports bar. The only sports in this bar are the wall mounted dart boards. Like Tap & Bottle, there are no televisions. Saint Charles Tavern will be the next craft beer bar and bottle shop to open and will be the first to serve South Tucson. Veterans to Tucson’s craft beer scene, Elizabeth Menke and Churchill Brauninger, most recently of La Cocina and the Dusty Monk Pub are set to open up a beautiful craft beer bar with artful recycled surfaces, a large tap list and over 150 bottled and canned beers and growler fills. Saint Charles Tavern is set to open within the next two weeks. 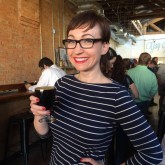