An Inside Look At Downtown Tucson’s Independent Distillery

Walk into The Independent Distillery and the 100-year-old bricks that stack their way up to the wooden beams brim with character. The bar, handcrafted from a Douglas fir salvaged from the remains of a Mount Lemmon fire, is sleek and showcases the countless spirits young and old.

Founder and CEO Don Northrup began working on The Independent Distillery nearly six years ago. Since opening their large barn doors three months ago, the team of distillers are just getting their feet wet.

It all began when Northrup’s frustration with the alcohol industry’s limiting expansion collided with a deep passion for history and maverick spirit. The Independent Distillery is now making a name for itself downtown while spearheading the small-scale distillery movement in Tucson.

With many prohibition era bars popping up out of the woodwork, Northrup explains that he wants to take people on a journey that goes even farther back.

When alcohol was the contraband of choice, the bathtub gin wasn’t exactly easy sipping. Drinks were created to mask the flavor of the alcohol, but Northrup has nothing to hide.

“We are serving alcohol driven cocktails,” Northrup said, “…to remind people of a time when alcohol had flavor.”

The distillery will be producing small batches of whiskey, gin, vodka and rum.

While the team waits for the final steps in federal approval for their on-site distilling, they are bringing century old spirits back to the forefront while touting their young distillery counterparts.

“We want to give the shelf space to people we respect and stand for,” Northrup said. Rittenhouse rye, Ypioca Cachaca Ouro rum and Plymouth gin are just among the few they’re using to produce simple and bold drinks, fusions and even a draft cocktail variety.

‘Dune juice’ is what they call it. It’s bourbon, fresh cinnamon, vanilla extract, and a bite of Serrano chile that blends and ages in a barrel. What resurrects is a deep, oaky profiled liquor with a touch of sweetness.

The distillery is also serving up smashes, a four-ingredient drink filled to the brim of a large sixteen-ounce jar with fresh fruits, herbs, aromatics, and homemade grenadine.

There is an intrinsic local quality to The Independent Distillery. The team owns 20,000 bees, which will begin producing within two seasons to contribute to the hand crafted cocktails.

But if you thought that was cool, don’t be surprised when you see a 4,000-year-old corn whiskey on the shelf. Northrup explains that they are working with the Tohono O’odham Nation to grow a 4,000 year old strain of heritage blue corn as well as Sonoran winter wheat. The distiller will also be incorporating Sorghum, which is a sweet, grassy grain used to produce rum before the West Indies infiltrated the states with sugar cane.

“This is what we’re about. This is our identity.” Northrup said.

In the coming months, the distillery is hoping to kick off production and distribution. Roughly fifty local businesses, including Proper, Hotel Congress, and three Whole Foods locations are lined up to offer the distillery’s makings.

Northrup is eager to begin production, but in the meantime he hopes he can take people on a journey the moment they walk into the bar.

“We wanted to create an atmosphere that would take you somewhere else, at least for a few hours,” Northrup said. “Somewhere completely different.” 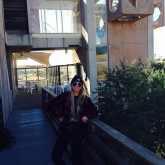 Sarah Pelfini is Tucson Foodie's 2015 summer intern. She is currently studying journalism and Chinese at the University of Arizona.