Janet Miller knows Tucson. She’s lived here for 31 years. But last year she met even more of it.

How? By volunteering at the annual Tucson Meet Yourself Folklife Festival, a three-day event celebrating food, heritage, folk art, music, and dance of the many cultures living within Tucson.

Miller’s volunteer job was “vendor hospitality,” which meant delivering water to folk artists demonstrating their crafts in the courtyard of El Presidio Courthouse. To make it easier—and more attractive—Miller brought from home a water jug she’d decorated with plastic flowers and an old cart strung with bells she once pushed in the All Souls’ Procession.

“I just pushed it around all afternoon talking to artists from all over the planet as I gave them water,” Miller said. “By the time I got back to where I started, it was 90 minutes later and everyone was ready for a refill.”

Miller said her volunteer experience gave her a deeper understanding of the festival, the Tucson community, and the world at large. “It was like child’s play work. There are no onerous tasks. Whatever you take on is going to be fun.”

This year, TMY organizers are hoping to draw up to 600 volunteers to help out at the three-day event in downtown Tucson, said Jessica Escobedo, volunteer coordinator.

Volunteers are the “backbone” of Tucson Meet Yourself, Escobedo said. “There’s no way we could afford to pay 600 extra people to make the festival run and keep it free for the public.”

Now in its 43rd year, the festival is produced by the Southwest Folklife Alliance, a nonprofit organization that helps support, honor and promote the traditional arts and heritage practices of the region and that compliment the festival year-round.

Time commitment for volunteers is one, four-hour shift, though many volunteers sign up for two or three shifts, Escobedo said. Duties include everything from tending to vendors, handing out programs, assisting stage performances, and more. This year, TMY organizers are creating an orientation video that volunteers can watch on their own time before the festival.

About 40-50 percent of volunteers each year are University of Arizona students, Escobedo said, fulfilling philanthropy requirements for various clubs and organizations.

In recent years the festival has become known as a “green festival,” because of its collaboration with the Compost Cats, a UA student group that collects food waste and scraps and turns it into compost at San Xavier Cooperative Farm.

Before becoming volunteer coordinator, Escobedo herself volunteered herself at the Festival, encouraged by her father, Tim Escobedo, Festival Operations Director. What she enjoyed most was “supporting the whole meaning of the festival, bringing together cultures and people from all over,” she said.

Cecilia Arosemena said helping out at Tucson Meet Yourself means “you must sweat a lot!” But that’s a small price to pay for a world of fun and education, she said. “For me it was revolutionary. I had never been to the festival. I didn’t know that our community did this every year,” she said. Arosemena is a personal Ayurvedic chef through her business Dish for Dosha, which specializes in detoxifying and cleansing juices. Her business was incubated at the YWCA Women’s Business Center, a program that provides business and management training for women. Through the program she met Liane Hernandez, YWCA Executive Chef, and the coordinator of Tucson Meet Yourself’s Culture Kitchen.

“I really value volunteering,” Arosemena said. “After all the support my business was given, I was game to help Liane with anything.”

Arosemena helped out in the Culture Kitchen, a venue for lectures on food heritage and cooking. Arosemena loaded and unloaded supplies and also gave a 45-minute presentation about eating well and caring for the body based on her own business and health practices.

In the future, Arosemena plans to participate as a Festival vendor selling healthy juices: “When I get strong enough as a company,” she said.

Other highlights of this year’s festival include a City of Gastronomy exhibit to complement the Kitchen Stadium and educate the public about why Tucson was named as such by UNESCO; a display of Korean lanterns; a car show organized by The Dukes, a lowrider/oldies club; and a spectacular Saturday night performance by the Yellow Bird Indian Dancers company, national champions mixing Apache and Northern Plains traditions.

Escobedo said she’s particularly looking for “happy people” willing to work as donation collectors. Tucson Meet Yourself is a free festival that depends on the support of its volunteers. Asking the public for donations is one way to help sustain the festival.

Escobedo’s aim is to make volunteers feel valued. “We make them feel that they’re part of a team.”

Volunteers are well supported with a shady resting area, snacks and cold drinks. They are also encouraged to stay and enjoy the Festival after their shift, Escobedo said. “We give them food vouchers so they can try different foods out,” she said.

By helping to make the festival run, volunteers both directly and indirectly support food vendors, Escobedo said. Half of TMY’s food vendors are small entrepreneurs, families, or ethnic and regional food businesses. The other half are nonprofit clubs, churches, temples, and associations, for whom the Festival offers an important fundraising venue to support their cultural activities.

Many vendors also use revenue earned at the festival to support additional cultural activities such as travel, heritage workshops, and performances, some of which can be seen and experienced at the festival. Special music and dance performances will take place throughout the weekend.

“Being a part of something like this is really special. You don’t realize how all these things come together to make this festival possible until you are a part of it,” Escobedo said. 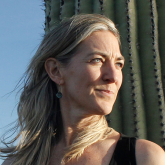 Kimi Eisele is a Tucson-based writer and artist.