University Boulevard isn’t best known for charming ambiance. Many establishments cater to students’ appetites in ways that are fast and easy: pizza and beer, tacos, and chips and salsa. With loud music and bright lights, these spaces remind you of where you are – on the campus of a large state university.

But stepping into Woops! BakeShop on University is different. With, distressed white wood walls, old-fashioned tile floor, vases of yellow mums on each table, and jade plants along the windowsill, the sun streams through the windows to reveal this place as bakery, community-meeting space, study area, and refuge rolled into one.

Woops!’s rustic chic décor allows for the main attraction to shine. Along the counter are plates full of fresh-baked croissants and cookies, culminating in a display case lined with a rainbow of macarons offered in eighteen flavors, including coffee and coconut, dark chocolate and lemon poppy, red velvet and rose.

Behind the counter, Ellie Lippel makes an espresso while Naomi Lippel rings up a customer in a Wildcat shirt. The sisters, 47 and 54, were raised in Tucson, but both had been away for nearly three decades before returning and opening the bakery in August. Theirs is the first western franchise of Woops!, a company founded by a by a close-knit circle of friends in New York City.

Woops! started on a whim as a macaron kiosk in Bryant Park’s holiday market—where shoppers went to ice-skate, drink cocoa, and shop for gifts. People responded so well to the macarons and aesthetic that the friends decided to expand to kiosks in malls in the Northeast and by the end of 2013, opened their first bakeshop.

Ellie, who worked in marketing and as financial advisor from beginning of Woops!, lived in Israel before New York. She had intended to do a year abroad in college but ended up staying to work in peace-building for 13 years. The close-knit group of friends who founded and run Woops are from all over the world: Israel, France, India, and the U.S. Their cultural diversity is integrated not only in the ambience but in the menu, which includes typically unattainable items, like French macarons and real French croissants (actually brought in from France, par-baked), Belgian waffles, South American alfajor, New York bagels (again, straight from NYC), and rugelach.

Naomi worked as the director of a nonprofit agency in New Mexico for over two decades, but for years, she and her sister had talked about starting a business together. With their parents aging, both felt the pull towards home. Woops! had been thinking about expanding out west and it provided the perfect opportunity to the sisters to fulfill the longtime dream of working together.

“I remembered once we were on this track that I always wanted to open a café since I was in my 20s,” Naomi says. “I frequented one around here, did some research but then life sent me in another direction. I thought: full circle.” Naomi also loved “the idea of not being behind a desk after 20 years of a desk job.” The sisters take on different roles. Naomi makes sure the shop is stocked with supplies and tools and often does the morning baking. Ellie schedules the staff. Often they don’t see one another but they do have a few shifts together each week. They enjoy working in tandem and engaging with customers.

Even with five part-time employees, both sisters are working 60 to 70 hours a week. Additionally for both, moving out of desk jobs and into the rigor of running a bakery has been an adjustment.

“I have to say it is very physical work. I’m loving being on my feet, running around, but I enjoy my naps in a way I never did before,” says Ellie, laughing.

Naomi says she’s acquired a whole new skill set. She gestures to the café and says,“People call this unskilled labor, but there’s nothing unskilled about it. Exercising the brain, motor skills—I have to think on my feet in a way I’ve never done before. Luckily, Tucson feels like a supportive space to be first-time business owners.”

“Tucson people are very special, welcoming, patient, forgiving,” Naomi says. “Having a community that’s so encouraging and supportive. It’s made it a real pleasure.”

One of her most satisfying moments so far was a day when she stopped to pause during a shift and noticed every single table was full and customers were talking to each other and laughing. “I thought, we did this. This is our place,” she says. “People feel comfortable and want to hang out here. They feel comfortable. It made my heart swell. We had imagined this and here it is.”

Ellie and Naomi recently hosted their sister’s birthday at the café and their family gathered around to eat and celebrate. The family was able to bear witness to the fruits of their labor. “Our parents are very proud of us and blown away by what we’ve accomplished,” Naomi says.

Just when the sisters were looking, a space fortuitously opened up at Main Gate. Ellie appreciates the diverse crowd the café draws, which includes American students as well as an array of international students, young families, and longtime residents of the university neighborhoods. She believes that the ambience of the café draws people in.

“People come in and say, this reminds me of when I was in Europe,” she says. “This takes them back to that experience and that I love. They also say, ‘Wow, it doesn’t feel like I’m on campus.’” At the café, students are working, laptops open, moving pens across notepads. Ellie says that fostering creative work environment has always been important to Woops. “At Williamsburg branch, there was this creative young atmosphere in the neighborhood and writers, artists, photographers were always sharing work with us at Woops!,” says Ellie. She and Naomi hope to collaborate with customers who create their work on site: offering spaces for writers to read their work and artists to exhibit. One day, a young woman who had been doing watercolors thanked Ellie for the space and Ellie spoke to her about a possible collaboration, unique gift cards for gift boxes.

“Students are coming to us with their ideas,” Ellie says. Photography students have come at 5 a.m. to take photographs of the sisters baking. “For me, it’s coming back to Tucson, Tucson is home for me. This is giving me a way to reconnect with where I grew up with and to meet people.”

Not Just Another Chain

Ellie’s involvement with Woops! since the beginning allowed her to envision opening this shop, a business that not only provides quality coffee and pastries but responds to the wants and needs of the community.

“I’m a creative independent person. But with franchise, you think cookie cutter. That’s not what the company is about,” she says. “We want it to be a local neighborhood stop. Why this worked for me is because of a company that is genuine in its mission, trying to create a welcoming space as each community desires.”

Because she worked with the company and this is the first western franchise, Ellie is able to let the company know what is working and what needs modification. They found the 741 square-foot space—previously a t-shirt shop–in June 2015. The build-out began a year later and they opened on August 29.

Ellie says Woops! offers something unique in Tucson because neither pastry nor coffee is an afterthought. In addition to pastries, the bakeshop also offers sandwiches, served on ciabatta baked in house.

In their first month, Woops! sold 10,000 macarons. Besides their large cookies—red velvet with cream cheese, chocolate chip walnut—the next top seller is their bagels. One Woops! innovation is taking rugelach, a delicacy of Jewish descent that is typically sweet, and offering it in savory options. These flaky treats come not only in nutella but jalapeno, bleu cheese, feta and olive and pizza.

Woops! also caters—providing pastries and favor boxes for parties, showers, and weddings. For family weekend, they catered a sorority party with an assortment of pastries and a macaroon tree featuring the sorority’s lettering.

Part of the influence of international partners is about remembering what it means to slow down. “Whether it’s someone from the Middle East who knows it’s time to sit down for coffee and take that time. Or someone from France or Belgium that knows a good pastry, it’s about the ritual, Ellie says. “It’s about taking the time, that lifestyle choice: enjoying where you are at the moment.” 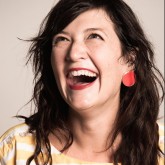 Lisa O'Neill is an essayist, narrative journalist, and creative nonfiction writer based in Tucson, Arizona.