All you need to know about this bold and juicy fruit.

Late summer is prickly pear harvest time and so in keeping with the season, Tanque Verde Guest Ranch hosts an annual Prickly Pear Harvest. This year, the event takes place from Wednesday, August 14 – Tuesday, August 27 — so you’re in luck.

Resort guests are able to partake in the foraging event where they will learn how to recognize and pick ripe fruit and prepare the colorful bounty into a sweet sauce. Executive chef Janet Jones will give a hands-on demonstration about preparation and talk about the sustainable aspects of harvesting prickly pear.

Last year, Tucson Foodie was able to capture the experience in order to entice you for the season currently taking place. Read on about the experience (and learn a little more about the vibrant fruit lining our cactus-laden streets).

They scouted fruit — called tuna in Spanish — that displayed deep, dark magenta colors with no green hue remaining on the pods. The color indicates that the wild food is sweet and ready for harvest.

Prickly pear cactus plants are prevalent throughout the Tucson area, but the fruit of cacti that grow near irrigated urban gardens or suburban yards display more vibrant colors than those in drier environs. The same would be true for prickly pear in the wild that are near tanks, draws or other water sources.

Note: Foraging is not permitted in Saguaro National Park or other national parks. Check with the administration of other public areas to learn if foraging is allowed.

The fruit grows on the highest paddles (or nopales) of the prickly pear plant, and the tunas growing at Tanque Verde Guest Ranch were the size of small kiwi fruit.

White spots on the prickly pear looked like fungus, but participants learned that it was the residue of little bugs that burrow into the green cactus paddles. A natural dye used in textiles, pharmaceuticals, and cosmetics is made from the tunneling insects. The bug dye produces crimson and scarlet colors. Pickers were careful not to touch the fruit to avoid the annoying cactus spikes, but also to dodge staining their fingers with the deep reddish purple. Although the micro spines that cover the fruit and paddles are irritating, they eventually work themselves out of human skin if harvesters happen to get a few in their fingers, arms or legs while harvesting. Of course, long pants and sleeves help protect pickers from the annoyance. Foragers should also watch for snakes and bring water, hats, and sunscreen when going out to harvest prickly pear fruit.

Guests picked the ripe fruit by twisting the tuna slightly with the tongs to gently break it off the paddle. They picked one pod at a time to fill the buckets that they carried as they foraged around the ranch. In about one hour, the buckets were already full and heavy with the fruit of the Sonoran Desert. Just before noon, the prickly pear foragers reconvened in one of the ranch’s commercial kitchens to help Jones prepare the raw fruit pods.

“Here at the ranch, we’re well known for our Prickly Pear Margaritas, so we have to pick a lot of prickly pears,” Jones said. “It takes about 35 pods to get one-third of a cup.”

The foraging crew had filled about three buckets with prickly pear fruit, which the chef estimated would reduce down to about a gallon of juice. Fortunately, it would take only one to two ounces of the prickly pear syrup to lend vibrant pink colors to margaritas or other drinks.

First, Jones placed the prickly pear pods into a large colander and sprayed off all the bugs using the sink’s water sprayer. Then she rinsed the fruit under the water faucet and repeatedly swirled the big batch to take off the microspikes. The fruit pods knocked against each other in the colander, which helped rub off the prickly microfibers. The process removed only a portion of the spikes, so she donned leather gloves over the typical disposal food service gloves to handle the spiky fruit.

On the cutting board, the Tanque Verde Guest Ranch sous chef sliced off the tips of the pod and then made a short incision into the tough skin to cut a slit from end to end. That allowed her to peel off the thick skin with the edge of the knife. Since the interior flesh is slippery, she warned guests to take caution while extracting the juicy pulp.

Breaking down the fruit in such a way takes much detailed knife work, the professional explained, but the result of ranch-made sauces and syrups made without additives or preservatives was worth the effort.

“You know exactly what went into it: time, effort and love,” said Jones, who is part of the Gastronomic Union of Tucson. From Desert to Table

Finding fresh food that is not tainted with additives or preservatives is only one of the sustainable aspects of harvesting prickly pear. Food harvested locally and in-season is healthier and fresher than foods commercially produced and shipped from afar.

Foraging local prickly pear eliminates the need for transportation and thus reduces the carbon footprint as wild foods do not require long-haul transportation, storage in large facilities or the waste of plastic packaging. Harvesting prickly pear also gets pickers out into the fresh air and sunshine that are known to be healthful and brings them into the community with others. Many of the guest gleaners had not met before the event, which gave them reasons to share stories and learn about each other.

Jones explained that she prepares the sauce and freezes it for use throughout the rest of the year. The fruit, which is high in amino acids, vitamin B, magnesium, and iron might otherwise have laid waste.

Prickly pear has a slightly sweet and fruity taste, but sugars — honey, agave or cane sugar — are typically added to sweeten the fruit. The skinned pulp went into a large pot. Jones added honey and a little water before setting it on low heat to simmer. Soon, the aroma of plums rose from the simmering mixture while Jones used a strainer ladle to skim off cactus spikes that floated to the surface and stuck to the sides of the pot.

After the fruit had simmered, she put it through a sieve and simmered it some more. Jones repeated the sieving process several times to remove the needles and seeds. Finally, in the last stage, she poured the reduction through cheesecloth to remove the smallest fragments.

“Cheesecloth is expensive,” she warned.

She recommended that the mixture should simmer for 20 minutes (depending on how much water was added.)

Besides being used as a featured ingredient for the resort’s signature margaritas, prickly pear syrup is also used in the Tanque Verde Guest Ranch’s BBQ sauce, click here for the recipe. 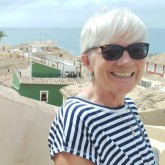 “Unstoppable Stacey” Wittig is a freelance travel writer based in Flagstaff. Follow her on Instagram at unstoppablestacey.