Taco Fish doesn’t have to advertise. It doesn’t have a flashing sign, cartoonish ads or an expensive location downtown. What gets people in the door is word of mouth; it’s the simple, filling, authentic tacos.

Owner Ana Aguayo developed her recipes in Ensenada, Baja California, Mexico, where she absolutely loved the seafood tacos. She dedicated time in her kitchen learning how to make them just the right way before opening a restaurant.

For her, the right way means fresh ingredients prepared daily, serving house-made jamaica and horchata, and making the food as the order registers. Qué fresca!

15 years ago, Aguayo and her husband started a food truck. Six years later, the truck was successful enough for the Aguayos to build their restaurant on the same lot.

Mr. Aguayo took on most of the building himself, having worked construction to supplement their income. And what he built is pretty unique here in Tucson. Sitting inside feels like sitting on a shaded pool patio, and the crew opens up an inverted garage door to the sky when the weather is pleasant. It has minimal beach and tiki décor and the constant alluring scent of steamy red peppers and ceviche.

It’s an unassuming space, but it has no need to be flashy.

Along with an expanded space, they added on menu items to include shrimp and octopus cocktails, tacos enchilados, and gave CeviFritos a new presentation. And, the truck continued to operate on Grant Road until 2017, when they sold it.

The main show at Taco Fish is, of course, tacos, but it offers much more. There’s also soups, seafood cocktails, quesadillas and tostadas, all full of seafood goodness.

The batter on each piece of shrimp and fish is fried a dark brown—it’s crunchy and buttery without being greasy. Each taco comes with enough ingredients for two, which the restaurant acknowledges with a second tortilla stuffed under each.

You might want a friend instead of a second tortilla if you plan to explore the menu. The tostadas are bigger than the average burger, and the taco Gordo—a mountainous taco of fried fish, shrimp, pepper and shredded marlin—is aptly named.

Taco Fish also pairs bichi soup with each order, which is kind of like tomato soup with chili heat, more onion, the inclusion of shrimp and stingray.

If that’s not enough to get folks in the door, the restaurant added weekly specials last year. The Monday special is half-off cahuamanta plates and tacos, the Taco Tuesday special is unlimited 99-cent fish tacos, and the Thursday special is two-for-one shrimp tacos (and yes, these specials also include the bichi).

Aguayo says almost all of her business comes from recommendations, whether online or by word of mouth. Even though Taco Fish isn’t on Instagram (yet), a quick search turns up a trove of dishes from this little desert oasis.

Although Aquaro has aspirations to open another location in the distant future, she plans on adding more specials at this one. She’d rather bring people in by adding value to each meal than revive Taco Fish ads on La Caliente (which was a thing once).

But even without the specials, locals and visitors have recommended Taco Fish for 15 years. It’s the kind of food only some of us are lucky enough to find in nana’s kitchen, and it reminds Tucsonans that authentic, delicious Mexican food can be filling and affordable.

26 Best Restaurants in Tucson for a Business Lunch Next post 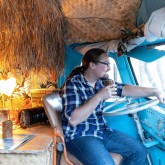 Greg is a writer, editor, and social media nut who you might've spotted skateboarding in Tucson's arroyos for the past couple decades. You can usually find him downtown scribbling in a notebook next to cocktails he can't actually afford.