"People who come to visit, I think they’re proud of us."

Nearly 900 miles from Tucson, in Austin, Texas, Michael “Miguel” Kaiser admits that not many people understand the true meaning behind the name of his food truck, T-Loc’s Sonora Hot Dogs.

“I tell them it means Texas Locals,” said Kaiser said, with a smirk. “In California, you’ve got Nor Cal or So Cal. In Tucson, you have T-Loc’s. The word is out there but it’s not really used. I embrace it.” Although, taking a peek around and you’ll see it’s tough to keep up the ruse. There’s a University of Arizona “Block A” flag in the dining area and a sticker on the truck, Ben’s Bells and eegee’s stickers are dotted next to the order window, and there’s Arizona and Sonora, Mexico, license plates on a back fence.

A little bit of Tucson in Texas

If that isn’t giveaway enough, then there’s the menu. It’s built around the Sonoran Hot Dog, with Kaiser and his business partner, Zulma Nataren, serving the centerpiece of the cuisine of their former home in Tucson. They opened up T-Loc’s Sonora Hot Dogs eight years ago in Austin. “My mom said, ‘I can’t believe you left to do hot dogs,” said Kaiser. “I’m not doing French food or something fancy, but we’re doing something we believe is comfort food. We just wanted to introduce street food from where we’re from to somewhere else, and we think Austin is a great place for it.”

The Sonoran Hot Dog — bacon-wrapped, and topped with beans, onions, tomatoes, and a variety of condiments, including jalapeño sauce — has, in recent years, grown from popular street food to culinary star, culminating with the selection of Tucson’s El Guero Canelo for a James Beard Award in 2018.

T-Loc’s is located in a food truck park off a busy stretch of road in Texas’ capital city, where Kaiser and Nataren sling Sonoran Hot Dogs, tacos, burritos, and other Tucson-inspired treats like ranch fries.

How things got rollin’

When they first moved to Austin, it took a year and a half of working two jobs at hotels and restaurants for them to save enough money to buy the trailer. Then, it was another few years before they could focus on the truck full-time.

They’ve since won local hot dog and taco competitions and have been recognized by Yelp as one of the highest-rated restaurants in the state. On top of that, they were chosen as an initial vendor in Q2 Stadium, the home of the new Major League Soccer team, Austin FC.

“When Miguel said Sonoran dogs, I thought he was joking,” said Nataren. “I think we made it and I think we’re representing the good of Tucson. People who come to visit, I think they’re proud of us. I think we’re putting Tucson on the map.”

Part of that success can be chalked up to their authenticity.

They get their tortillas delivered from a distributor who gets the tortillas from Agua Prieta, Sonora, and the steam buns from Alejandro’s Tortilla Factory on Tucson’s south-side. Every time they visit friends and family in Tucson, they pack 40 boxes into their SUV — the maximum amount that will fit alongside Kaiser, Nataren, and their dog. Meanwhile, 600 buns arrive each week via FedEx, some green in the color of Austin FC, and some orange to serve on University of Texas football game days. “It’s fun participating and being part of the community and we’re part of the neighborhood as well,” said Kaiser.

They do that and more, serving as a de-facto meeting place for those visiting from Arizona or the ones with ties to Tucson. In fact, so much so that Nataren jokes they should rebrand as the “Church of T-Loc’s.” Recently, they were visited by a family from Phoenix, a man wearing an Arizona Wildcats basketball t-shirt, and a couple from Guam who attended the University of Arizona and Arizona State University — ensuring that they’re nice to any Sun Devils, too. Through their work, they’ve found a number of other Tucson connections in the local culinary scene. That’s headlined by former Tucson chef and native Kevin Fink of Zona 78, a James Beard award nominee, who runs Emmer & Rye near downtown Austin.

“We all have good stories about back home,” said Kaiser. “Have you eaten here? Have you gone here? Have you been to Sedona? We all share a common interest of where we used to live, but we’re all happy and proud living in Texas now.”

For the love of food

They like to say their motto is “food, travel, and culture.”

Kaiser’s appreciation for food and culture partly came from a nomadic childhood, which included exposure to different cuisines while living in Mississippi, Mexico, Texas, Hawaii, and Iran, before attending school in Tucson.

The other part came from his “gringo” dad, who would grill steaks and ribs, and his Mexican mother and great-grandmother, who’d cook entomatadas in Veracruz, Mexico.

Traveling and living in different places just opened us to food,” said Kaiser. “That’s what we did as a family, we would go out to eat or cook at home.”

After college, he started working in medical sales and respiratory care, but after a friend invited him to move up to Phoenix he used the opportunity to attend Scottsdale Culinary Institute. That’s where he got his first taste of working in a kitchen at Per Se — a New York City-based restaurant. He moved back to Tucson and worked his way into jobs at two Tucson resorts, Westward Look and the Westin La Paloma, handling everything from banquets to private events, from baking to making sauces. It was also there he met Nataren, who immigrated to Tucson from Honduras, and worked her way up from cleaning rooms to serving at the resort pool, which helped her learn English, too.

About a decade ago, the two were looking for a change and an opportunity to start their own food business. Austin’s weather and long-standing reputation as a food truck hub were appealing, and the plan was cemented by a trip to Hermosillo, the birthplace of the Sonoran Hot Dog. Standing amongst the dogueros, Kaiser filmed a video before their move, saying “Here we come Austin.”

“We saw the Sonoran hot dog business and the culture grow in Tucson,” said Kaiser. “I said let’s take it somewhere else and elevate it a little more.”

Kaiser and Nataren admit they think about Tucson daily.

They’ve been asked about opening a Tucson spot, but are more focused on Austin with catering, the stadium stand, and a potential brick-and-mortar spot down the road. As of late, they’ve gotten a lot of attention — both in Austin and back in Tucson — that Nataren jokes there might be another option.

“One day, if we get tired, we should just disappear,” said Nataren. “Leave as a legend.”

If you happen to journey over to Austin soon, pay them a visit. For more information, visit tlocs.com or follow T-Loc’s on Instagram. 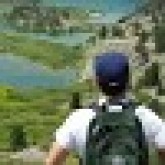 Justin Sayers is an Austin-based reporter and writer. You can reach him via email at justin.sm.sayers@gmail.com.