Chef Malta Joe Gauci, owner of Malta Joe’s Baked Goods, is a food writer’s dream interview. He’s passionate about his product, has lots of stories to tell, is knowledgeable about Malta and its culture, has plans for the future, and, best of all, brings warm pastizzi to interviews. The hard part was asking questions with my mouth full of his wonderful pastizzi — pronounced pah-sti-zi. What exactly is pastizzi?

Pastizzi is a savory pastry consisting of handmade phyllo dough filled with either a ricotta cheese blend or curried peas and then baked golden and crunchy brown. Joe makes other flavors, more about those later.

“It’s the street food of Malta,” said Gauci. “It’s on every street corner. It’s their pride. Don’t mess with their pastizzi,” said Gauci, adding, “It’s my mother’s recipe. I grew up eating them.”

Gauci sells his pastizzi from his colorful truck, the Pastizzi Express, at the Heirloom Farmers Market at Rillito Park and at other foodie events around the city and the state. Recently he was asked to bring his truck to Sedona for a wine festival. “I travel. I hook up my truck and I travel,” he said. “The food truck is my marketing tool. If someone is in front of my truck and doesn’t know what a pastizzi is, I give it to them. It’s my job to get it into their mouths. They try it and now they’re buying three.”

Pastizzi are a little hard to find in America.

There are one or two other sources in the country and shops in Queens, but that’s it. So, Gauci decided to start a mail-order business where he ships his wares nationwide. The shipping costs are high because this is a two-day service, but people don’t seem to mind.

“I ship all across the country to hundreds and hundreds of Maltese families,” said Gauci. “They love them and want everything sent to them.” Pastizzi originated in Malta, a small but densely populated island just south of Sicily. Due to its proximity to both Europe and North Africa, Malta has influences from all the countries that conquered it over the centuries. This is especially true when it comes to food.

Gauci originated in Connecticut but spent 35 years as a sound engineer in Manhattan. He loved his job yet he eventually retired and moved to Tucson.

But Gauci is not the retiring type. He had to find an outlet for his creativity.

“One Christmas I was making Maltese Christmas cookies for my family,” he said. With three siblings and 10 nieces and nephews living elsewhere, that was a lot of baking. “I was finished baking and looking through my mom’s recipe book and this recipe fell out of the book.”

It was his mother’s pastizzi recipe.

“It had been missing for decades,” he said. The little recipe seemed the perfect solution to his retirement ennui. “I started making them that year. I’d give them to neighbors, who loved them.” The neighbors encouraged him to do something with his treats and thus began Malta Joe’s pastizzi business.
Gauci started small, selling his wares at farmers’ markets, and then because people liked his food, he decided to go professional. He got the necessary permits, found a commissary kitchen, bought the necessary equipment, and, still using his mother’s rolling pin, founded Malta Joe’s Baked Goods.

His first food event was at an Iron Chef Tucson at the Westin La Paloma Resort & Spa, which is where I first ate one of his mini pastizzi. I was taken by the flaky crust and the creamy flavorful interior. That was in 2016 and I remember the experience like it was yesterday. That’s how good it was. But somehow, I lost track of him. Big mistake.

Gauci’s pastizzi are even better today

Three years ago, he traveled to Malta to learn more about pastizzi making. While the people there were friendly and warm, the same couldn’t be said about the pastizzi makers. Competition is stiff among them and no one would share any information until he got to the town of Tarxien, where his family came from.

There he met Mario Aquilina of Premavara Caterers, who knew Gauci’s grandmother. Aquilina agreed to help under one condition: Gauci had to show him his plane ticket home, which he readily did.

One of the most important lessons was how to make pastizzi in larger numbers.

“My mother made 12,” Gauci laughed, noting that’s no way to run a business. These days, Gauci makes between 200 to 350 pastizzi a day. And while he is the only full-time employee, you get the feeling when talking to him that he doesn’t mind all that work and time.

Last year he returned to Malta for a few more lessons.

Like making tamales or ravioli, making pastizzi is a labor-intensive and time-consuming project. Gauci’s mom would always make her dough the night before and then bake them in the morning. He often starts at 4 a.m. and he’s the first one in the commissary, which works well for the temperatures needed for a successful dough. As mentioned earlier, Gauci does bend the rules a little bit when it comes to the types of pastizzi he makes.

When it comes to the Malta Dog, Gauci wraps an all-beef Kosher dog in the dough so they are not the traditional pastizzi shape. The spicy dog is complemented by the ‘buttery’ crust (Note: there is no butter in pastizzi). They are a nice switch from our famous Sonoran dogs. He also has seasonal sweet pastizzi. Currently, he’s selling a Pumpkin Spice Pastizzi with a sweet cream cheese base. Come the holidays, he switches over to apple strudel.

Then there are the three regular flavors: Curried Pea, Ricotta, and Southwest.

“I make the Southwest for Tucson people,” said Gauci. “I found a guy who grows a mild Hatch chile.” These also have bacon and ricotta inside. The heat is mild — kid-friendly, he noted — and the rest of the ingredients still stand out.

The Curried Pea Pastizzi, inspired by North African settlers in Malta centuries ago, are a wonder. The first bite releases the fragrance of the mild curry. Blended with the flavors of sweet peas, onion, and garlic they are a perfect balance. These treats are made with Earth Balance Vegan Spread. Vegans will be most pleased with the results. My favorite is the ricotta-filled. The creamy interior is the ideal match for the flakey, crispy wrap. These come in both regular and mini pastizzi. Beware of those minis. They disappear quickly.

Gauci also has a Timpana on the menu. Timpana is basically a pasta pot pie filled with mushrooms, onions, ground beef, sausage, Parmesan, ricotta, and mozzarella cheese topped with a crust. He sells them fresh from the Pastizzi Express and frozen via shipping. A full menu of Gauci’s other baked goods, which includes custom cakes, cupcakes, cookies of all sorts, brownies, seasonal coffee cakes, and quick bread loaves can be found online.

“I have a team that does that work. They work per order,” he said.

However, he still plays a role in this side by creating the fillings and doing some of the baking. Check out the website, to get a real idea of what this side of his menu is like. You’ll be awed by the artistry.

The future of Malta Joe’s

Gauci is a very creative guy but he’s also an astute business person. Listening to him talk about the details of running a food business is like a lesson in how it should be done. He could write a book for anyone who wants their own small business, food-related or not.

Having his own kitchen is an example of being a savvy business person.

“In April, I bought a building on South Palo Verde,” said Gauci. “It’s going to be my ‘factory’.”

The 1,800-square-foot space, a former laundromat, will be a state-of-the-art USDA kitchen with large rolling machines, bigger ovens, and is temperature-controlled to ensure the perfect dough. I’d bet that mama’s rolling pin will still be a part of the works.

The move will also allow Gauci to do something even better.

“In a couple of months, I’m going get out of the commissary, walk into my own building, close the door, and create,” he said. His own kitchen will also allow him to pursue his plan to make more pastizzi and get them in restaurants, coffee shops, and other outlets. He hopes to get his frozen product (which is what he ships) into grocery stores and larger markets.

Recently, he received a very interesting phone call. It seems that a couple of his fans in New York City heard that he was heading there to visit family. Next thing he knew he was talking to Adam Kuymizakis, the Deputy Permanent Representative to Ambassador on his phone.

“He [Kuymizakis] said, ‘We’ve been following you. We like your Malta pride. We love everything you’re doing. How would you like to meet with the UN Ambassador?'” Needless to say, Gauci was stunned. But the conversation at that meeting was even more astounding. “They want me to bring the Pastizzi Express to serve my pastizzi in front of the United Nations next year. They told me, ‘We want you to bring your beautiful food truck, park it in the plaza and give away your pastizzi’.”

The three-day event is part of the American Malta Celebration which occurs in mid-September. The embassy is picking up the whole tab for Gauci, his team, and the truck, which will probably be transported across the country via rail or truck. After that, the whole shebang will travel to the Malta Embassy in Washington D.C. for a three-day event there.

Gauci is already researching every detail.

Once you’ve tried one of Malta Joe’s pastizzi you will become a fan. You may even develop such a hankering for them only to find it’s Wednesday and you won’t see him until Sunday. Not to worry. Gauci sells his wares either baked or frozen during the week. And he delivers for free if you order two dozen ($5 charge for a dozen.) You just have to let him know if you want your pastizzi cooked or frozen.

If you decide to order some to bake at home, it’s easy:

Preheat the oven to 450° and bake them on a baking sheet for 35-40 minutes (less time for the sweet pastizzi.)

“The house smells like heaven,” said Gauci, adding this piece of advice to get the true Maltese experience, “You have to cook them until they’re well done — not burnt — well done.” This means golden brown. “Do not put them in the microwave,” he emphasized, referring to those reheating the pastizzi.

The thing about pastizzi is that they are good eats anytime, anywhere.

Toast a couple up in the toaster oven and then pack them in your lunch box. To be the hit at your next potluck, bring a dozen or two. You can enjoy them for breakfast, lunch, or dinner. They’re portable and while a bit crumbly, they’re a tasty hand-held nosh. So, what’re a few bits of toasty phyllo on your shirt?

With all the ethnic foods we have here in our City of Gastronomy, Malta Joe Gauci’s pastizzi is a wonderful addition. As he grows his business, his foods will be found in more places which is a very good thing. But part of the fun of eating pastizzi is Malta Joe himself.

Visit Malta Joe at the Rillito Heirloom Farmers Market and you’ll see what I mean. You can’t miss him. He’ll be standing in front of his bright, red Pastizzi Express selling his tasty pastizzi.

What's cookin' at the 2022 Tucson Meet Yourself festival Previous post 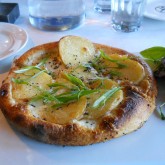