Growing heirloom tomatoes in Tucson is not an impossible task.

I’ve been growing two varieties of heirloom tomatoes: San Marzanos, which are an Italian plum tomato mostly used for paste, and Pink Brandywines. They’re both doing extremely well. I have five of each plant with tomatoes piling up. The Brandywines get used quickly, but the San Marzanos, not so much. In fact, the seed packet stated it was one of the most high-yielding tomato plants that literally “drips” with fruit. True dat.

Here are some of the key elements I’ve discovered to growing heirloom tomatoes in Tucson’s climate.

1. Start from seed indoors in November or December You really want to get the plants in the ground as soon as possible. After the last frost is when most gardeners recommend, however I put mine in the ground at the end of February. If you think it’s going to frost, just cover them. Also, contrary to most recommendations, and as an experiment, I transplanted a few plants into the ground long before they were up to transplant size. All three of those plants are strong, a lovely green, and fruiting.

One of the reasons to get the plants in the ground so early is that heirlooms tend to have a much longer time to mature: 75 to 90 days. If you wait too long, it’ll get too hot.

2. Use the best compost possible

I purchased Foxfarm’s Happy Frog Soil Conditioner from Mesquite Valley Growers. I mixed it about half with the existing soil. The leaves are bright, strong and green and the plants seem very happy. I gave one of my plants, before transplant, to a friend who used our backyard compost and soil, and not only did that plant almost die, the color green wasn’t even close to the color of my plants in the ground. We ended up transplanting that plant (it was in a pot) into the ground where my thriving plants are. Within a few weeks it was looking much healthier and is now flowering. Tomatoes are hungry plants. Give them food. I also fed them Foxfarms’s All Purpose Organic Fertilizer once or twice.

If you plant as close together as is recommended (maybe even closer) and prune very little, you’ll build up a canopy of leaves which protects the fruit from the sun. You’ll also create a much more humid climate. You can stick your hand down inside and feel it. It’s wetter and a little cooler. Also known as humidity. This is where I messed up the most. I had no idea how large these plants would grow. I figured I could stake them as they got bigger or get some cages. But it happened so fast and I got cages a little too late. The cages were super difficult to get over the already overgrown plant, and they didn’t really end up doing much either. A tall and thick stake deep in the ground is your best bet. If you prune little to create the micro-climate, you’ll make up for the minimal pruning by endlessly tying the large suckers that jut out of the main stalk to the stake. I enjoy it, actually. But it does seem like every few days I’m tying something else to the stake. The Brandywines are large tomatoes and will really weigh down the plant. A clever staking sytem is essential. I’ve seen some innovative systems using stakes and twine, but it hasn’t worked for me. Standard stakes (tall ones!) and twine is all I’ve been using and it works great.

5. Get at least six hours of sun Heirloom Brandywine tomatoes on the vine

I spent a couple of hours one morning watching where in my very limited space the sun might shine the fullest and planted there. Around 9:30 or 10am the sun starts to hit my plants until about 6pm/6:30.

Ideally, the plants would be getting more morning sun and less afternoon sun, but other than a tomato that fruited above the canopy and was scalded, I haven’t noticed any problems with the scorching afternoon sun.

6. Make sure the plants get plenty of water

In the beginning, I had a soaker hose woven around the base stems that I would run for about 30 minutes, sometimes more, in the morning. However, I wanted to conserve water and focus it more directly so I installed a drip system and am super-happy with the results. I have it on a timer that waters for 10 minutes every 6 hours. I now swear by the drip system. I never minded manually watering, but I really don’t mind not having to water at all. I even put all my potted herbs on drip, too.

I’m by no means a master gardener, but I am having plenty of success with the heirloom tomatoes. I hope some of the above information helps.

Here are some places to get more info: 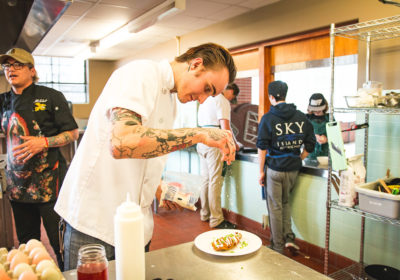 If you grew up in America’s public education system, cafeterias might make you shiver… 7 Local Cooking Classes to Step Up Your Game

Can’t tell the difference between a knife and a spoon? Well, you should probably… This Week at the Carriage House: Cooking Dishes from the Spring Garden

Here’s what’s shaking this week at the Carriage House: Chef Wilder presents “The…