FULL DISCLOSURE: I am the wife of Kevin Fink, as well as his biggest fan.

In 2012, Kevin Fink, chef and director of operations at Zona 78, was a stagier for three months at Noma, which was recently voted the number one restaurant in the world. During his time at the restaurant Kevin was fortunate enough to participate in Saturday Night Projects. These projects are designed to allow staff to present a dish highlighting an ingredient or technique, sparking discussion and creativity. Each dish is critiqued by Noma peers and by Executive Chef Rene Redzepi, a name that strikes awe in most chefs. At this time Kevin, had just started experimenting with cured meats and decided to present a Tete de Cochon (cured pig’s head) with seared koji cake, crispy kale, pickled turnips and greens, with a pine broth.

You can check out the entire experience in greater detail at Restaurant Wife.

Kevin has continued to explore curing meats at Zona 78, which is currently the only legal charcuterie producer in Pima County. Sourcing the pigs locally and feeding them the whey and compost from the restaurant, Kevin butchers the pork on a monthly basis, creating salumis, whole muscle cures (like coppa) and a variety of other products (such as pork chops) for both locations. 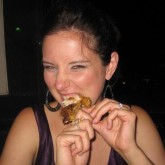 Alicynn Fink is a recent grad from the University of Gastronomic Sciences. Follow her stories at restaurantwife.com.