Living in Tucson means we’re lucky to be in close proximity to several authentic pan dulce options and panaderías. La Estrella Bakery is one of those, and possibly the most well-known Tucson panadería, which is Spanish for bakery.

The family-run bakery, which opened in the ’80s, serves pan dulce

Antonio and Martha Franco opened La Estrella in 1986. Ever since, the family-run bakery has served traditional Mexican pastries, cookies, bread, donuts, tortillas, tamales, and menudo. Most pan dulce, which is Spanish for sweet bread, was inspired by countries all over the world, most notably Spain and France.

Spain introduced Mexico to wheat, which soon became a staple in panaderías. To the Spanish, wheat was also a staple, but more of a religious necessity because it was the only acceptable grain when making sacramental bread. Although Spain introduced wheat to Mexico, it’s been said that France introduced the art of bread-making to Mexico.

When French bakers arrived in Mexico and began opening French bakeries, the concepts of baguettes, sweet pastries, and crispy rolls were introduced to the country. Mexico soon got on board.

As an added fun fact, the first French military intervention in Mexico was actually called Guerra de los Pasteles, which is Spanish for The Pastry War.

Foreign influence with a Mexican evolution

Panaderías may have gained initial inspiration from France and Spain, but Mexican pastries offer different tastes, textures, and appearances due to the inclusion of native fruits and baking procedures. And legend has it that pan dulce stemmed from one daring person who decided to dip his bread into a cup of hot cocoa.

Pan dulce can now, sometimes, be found in large grocers such as Costco and Walmart, which inspires many bakers to work harder toward pushing authenticity.

“Mexican pastries and bakeries are losing more of that authenticity in baking,” daughter of owners and La Estrella manager Isabel Montaño said. “But Mexico has so much pride. They don’t want traditions to change.”

Montaño notes that sometimes tradition and authenticity can be lost when crossing into the United States.

“But we want to have that same authenticity here in Tucson, too,” she said. Montaño’s sister, Erica Franco, enjoys traveling to new countries. When she returns to Tucson, she teaches the family about new cultures and their pastries.

More than 500 different pastries are made in Mexico daily. Similarly, La Estrella is always expanding their product line and finding more authentic ingredients to use.

Later in the year, La Estrella offers Pan de Muerto — in celebration of Dia de los Muertos — Spanish for Day of the Dead, which occurs from October 31 to November 2. The bakers work so hard on Pan de Muerto that their fingers become numb from all of the kneading and applying intricate details and colors.

La Estrella is just one bakery in Tucson, but they offer two locations and dozens of pastries. For our list below, La Estrella handpicked 15 of their most popular and traditional pan dulce options. The Bandera is a traditional flag cookie and is symbolic of the Mexican flag. The Chamuco is made with ingredients from the famous Concha cookies, which are featured further below.

Among the many ingredients put into the Chamuco, the pastry is made with sugar, wheat flour, and cinnamon. Sometimes Chamucos offer a cream cheese or fruit filling.

But the main difference between the Concha and the Chamuco is the shape. The Concha is fluffy, while the Chamuco is flat. The Chamuco dough is stretched and lengthened to form a circle, along with the sugar paste in the middle.

Chamucos are often associated with the Danish pastry, but Chamucos often have a larger circle of filling in the middle. The Cochito, Spanish for little piggy, is a Mexican gingerbread cookie shaped like — you guessed it — a pig.

But for everyone who actually dislikes gingerbread, have no fear. There’s a good chance you’ll still love the Cochito because the cookie doesn’t actually contain any ginger. Instead, the traditional Cochito obtains its flavor from molasses and cinnamon.

In Mexico, bakeries boil brown sugar to make their own molasses syrup. The syrup is added to the dough of the Cochito, then shaped into a pig. Sometimes a milk wash is used instead of an egg wash. After baking, the Cochito is a thick, cake-like texture. The Concha, Spanish for seashell, is the most popular pastry at panaderías.

“No matter where you travel in Mexico, you can always be sure to find the Concha in any bakery you visit,” Montaño said.

Conchas look similar to a seashell and offer a cookie texture on top of cinnamon bread. After the bread dough is kneaded, it’s set to rise for several hours. It’s then shaped and cut into a circle before being set to rise once again.

Once the bread dough is finished rising, the cookie dough is placed in the shape of a seashell on top of the bread roll. And finally, the Concha goes into the oven.

The Concha can also be made into a vanilla or chocolate flavor, often sprinkled with cinnamon or sugar. In many places, you might come across a Concha in different colors, but no matter the color, it will always have the same seashell shape. The Coyota is a cinnamon cookie made from a whole wheat flour tortilla and filled with Piloncillo —Mexican brown sugar. The cookie is usually flat and round, but La Estrella shapes theirs into a hat and adds a braid along the edge.

It’s been said that the Coyota originated in a small town in Sonora, Mexico, which is actually the city of Hermosillo today.

The Coyota is a hard, almost flaky pastry. The cinnamon sugar is tasty on the outside, but when breaking the pastry open, the insides are empty and covered in hardened brown sugar.

The demand for the Coyota is so high in Arizona, California, and Nevada, that many Sonoran bakeries export the cookies to the United States.

Some bakeries also offer the Coyota with various fillings including caramel, figs, or peaches. Montaño said, “Today many bakeries such as La Estrella, have converted this traditional pastry into their own by incorporating other simple ingredients for better presentation and flavor.”

Many cultures serve the Coyota with coffee, ice cream, or even savory dishes such as carne asada and chorizo burritos. 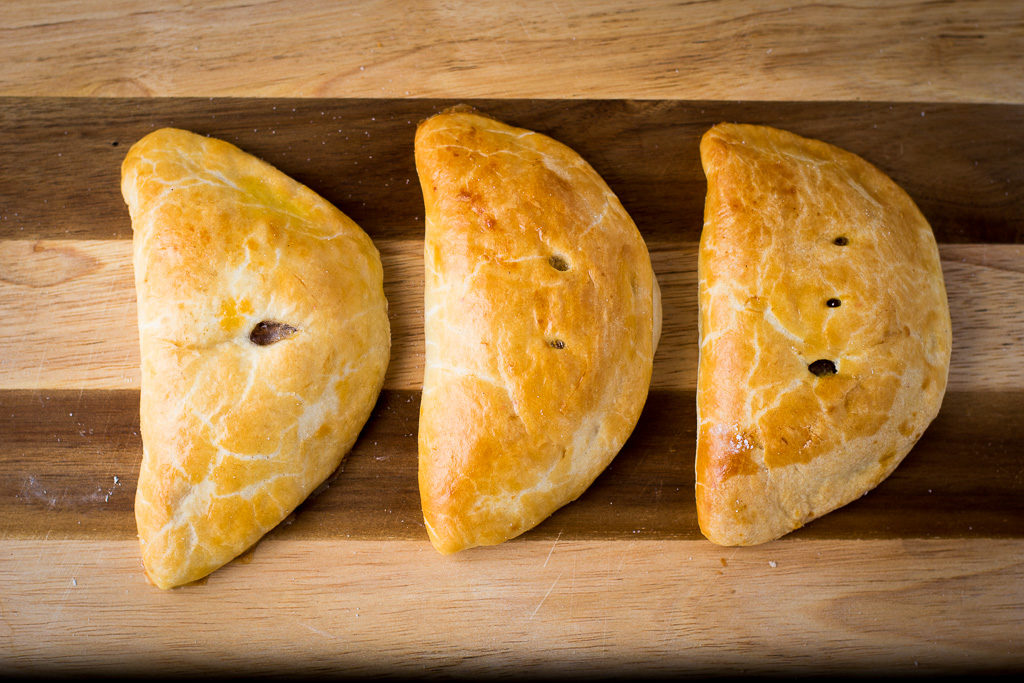 When getting to the middle of the turnover, you’ll find a sweet fruit filling. Of all the pastries listed, the Empanadas are probably the sweetest. La Estrella currently offers Empanadas with apple, pineapple, or pumpkin fillings.

These sweet Empanadas might taste even better warmed up with ice cream on top, but empanadas can also be found with savory fillings, including fish, pork, and chicken.

The origin of the Empanada is unknown because of its many variations all over the world, such as the Turkish Shwarma, Greek Gyro, and the Italian calzone.

“La Estrella also has customers that have migrated to the United States from Africa, whose custom is to fill the empanada with raw meat and herbs, and then bake them,” Montaño said. “This presentation of the empanada is also found throughout Latin America and Cuba,” she said.

Montaño added, “In Ecuador, the empanada traces back to the seventeenth century, where the people [had] an elaborate use of fillings over a dough made with white corn and animal fat.” Although Galletas de Boda can date back to the sixteenth century after the introduction of sugar cookies, the name of the cookie didn’t become popular in the United States until the 1950s.

The cookies are a smaller version of Mexican Polvoron cookies, which are made with pecans and usually used a centerpiece for wedding decorations.

Galletas de Boda have also been associated with sugar cookies and Russian teacakes. However, the cookies are not as soft as your average sugar cookie, and they’re topped with confectioners sugar. And since they’re small, you can have several of them without feeling too guilty about it. The Gallina, Spanish for chick, is a traditional pan dulce roll filled with vanilla creme.

The cinnamon bread is filled with Bavarian cream and topped with powdered sugar.

The bread itself is not very soft, but the vanilla creme filling adds a kick of flavor to the pastry. La Estrella’s interpretation of Nino Envuelto is a soft and spongey cake with strawberry filling and tiny coconut shavings on the outside.

The sweet version of Nino Envuelto, Spanish for wrapped-up baby, seems to date back to 1939. However, Nino Envuelto can also be made with savory fillings, including ham, cheese, cabbage, tuna, rice, or beef. Oreja is Spanish for ear, but in this case, elephant ear.

The flaky Oreja is slightly sweet and sticky and offers a crispy texture. “The Oreja tastes fantastic with or without a glass of milk or coffee,” Montaño said.

The Oreja’s history dates back to at least 1930 and is often served for breakfast. Orejas are similar to France’s Palmiers, except the French see theirs as the shape of a butterfly or a palm leaf.

Palmiers are biscuits made with sugared puff pastry and baked until the sugar caramelizes.

At La Estrella, the Oreja is also offered in a mini size. Pan Fino, Spanish for fine bread, includes a series of pan dulce options. Every version of Pan Fino is shaped into a different design, each crafted by hand.

The first version of Pan Fino at La Estrella is the Elote, Spanish for corn cob.

To make Pan Fino, the dough is rolled into a diamond shape and filled with a sugar paste made out of sugar, vanilla, water, flour, and shortening. The second Pan Fino design is the Cuerno, Spanish for bull’s horn.

The Cuerno is one of the most popular choices at La Estrella, although it tastes similar to the others in the Pan Fino family.

If you’re wondering what it tastes like, it’s one of the softest breads on the list and offers a sweet taste. The texture is chewy, similar to the middle of a cinnamon roll. The third of the Pan Fino series is the Leo, Spanish for log.

“Mexican bakers take pride in their creation as the perfection of the Pan Fino ultimately represents how detailed and experienced they are,” Montaño said. The last of the Pan Fino family is the Pierna, Spanish for leg. But sometimes children refer to the Pierna as an ice cream cone.

The Pierna is made with the same ingredients as the above Pan Fino series but has an egg wash instead of a sugar coat. The Yoyo is a sandwich of two sweet breads with apple filling in the middle. Because of the two rounded sweet breads, the pastry is said to look similar to a toy yo-yo.

The outside of the bread is coated with strawberry jam and tiny coconut shavings. Alternatively, other bakeries use raspberry jam instead of strawberry, and some use confectioners icing to “glue” the two breads together.

The pastry itself is soft, but not too sweet — until you hit the apple filling.

In Mexico City, the Yoyo is actually called Beso, Spanish for kiss, because the two breads are connected.

The pastry is also often associated with Ojo de Buey, which translates to bull’s eye or ox’s eye. Ojo de Buey is shaped like an eyeball with breading outside, and marmalade and coconut shavings inside.