Loving on our local brewery with some trivia.

If you haven’t sampled one of the local brews at Pueblo Vida Brewing Company, run, don’t walk.

The local brewery and taproom, located at 115 E. Broadway Blvd., has captured the hearts of refined beer drinkers and outdoor enthusiasts alike.

We (Tucson Foodie staff) have, at one time or another, each waited for a flavor-infusion release by checking @pueblovida, gawked at the beautiful beer presentation, and planned our afternoons accordingly.

Want to know what else?

We thought so. Here’s some behind-the-scenes trivia for you to rattle off the next time you crack open a cold one with friends (especially if you are curating a photo with one of their cans).

The rafters were “grown” in Tucson

Well, the trees used to make the taproom rafters are Mount Lemmon pine.

These higher temps mean spending some extra time up on the mountain and enjoying a few more cold beers while there! ? . . ?: @beer_voyager

And the rest of the taproom? The tables and shelves are made from recycled wood; the lights are sourced from a power plant in Washington State.

Looking to view a University of Arizona game or history-making championship, such as a World Cup game?

Pueblo Vida has hidden TVs that are only visible during special games. Who would’ve known?

Our Assistant Brewer / Sustainability Coordinator – Charlie Border recently sat down with the @sonoraninstitute to talk about the small steps we are taking to become a more sustainable brewery (especially since we are brewing in the desert, where water resources are scarce to begin with). Find the full interview by clicking the link in our bio – enjoy! . If you are interested in learning more about The Sonoran Institute and their awesome work in the Sonoran Desert, join us in the taproom on Monday, June 3rd (5-9PM) for our Make A Difference Monday! A portion of sales will be donated to their organization + they will be hanging out to answer any questions about their organization! See you there, cheers! ? . . . ?: @sonoraninstitute

A nod to sustainability

Using suppliers that re-charge ground water and make a positive environmental impact on our region is a step in the right direction. If you head to their social media, you can keep up with their sustainable efforts and ventures.

Making craft beer a sustainable industry goes beyond enacting changes at the actual brewing facility, it also means aligning your business with like-minded suppliers! . @bkw_farms in Marana supplies all our Unmalted Sonoran White Wheat and this week we toured their facility to learn more about their work with water usage in the Sonoran Desert. Ranging from re-charging the ground water via CAP water to unique irrigation techniques for their fields, @bkw_farms has been able to bring the water table level (within a 5 mile radius of their farm) back up to where it was in the 1980’s! . We love being able to have a key ingredient in our beer come from 20 miles away AND have that supplier care so much about preserving our environment! If you want to learn more about what BKW is doing in terms of water usage, there is a short video linked in our profile! Cheers! ??

And all that spent grain, from the brewing process, is donated to a local farm. Recycle, up-cycle, sustain!

A new beer infusion is crafted every Tuesday. But how? A unique ingredient is added to one of the beers on tap in only one keg (and it usually runs out by Tuesday night). So, if you want to try it, keep tabs on their Instagram or Facebook, and head over when they open at 4 p.m.

NEW INFUSION – Peaches N' Cream "Ecotone" Double IPA – Our single-hop Strata Double IPA always has crazy notes of peaches, so we are highlighting these tasting notes by adding fresh peach juice and a hefty handful of vanilla beans to give it some additional sweetness. This one is bound to go quickly, so don't miss out! . On tap at 4PM today! Crowlers/Growlers will be available! Cheers! ?

Pints & Poses, a beer and yoga experience, started the first Sunday that they opened the brewery to the public and has taken place ever since. The hour long yoga class starts at 10:30 a.m. and ends with a pint of beer for only $5. The teachers, representing various yoga studios around Tucson, rotate weekly.

Join in, stretch, and drink up!

Things I’m currently working on: 2 hr music playlist for a workshop -1 hr music playlist for a class -Researching essential oils/ incorporating them into my life -Communication -HW for a 50 hr teacher training module -Finalizing a 2 hr yoga & journaling workshop -Saving money -Organizing & writing out class content -Writing daily (this counts) -Starting/ completing 40 hrs of AZ massage therapy education -Handstands (always) -Wedding plans -Trying to overcome writer’s block I have bc of trying to write something that’s really hard for me Also being thankful every day for a supportive partner who showed up to capture these sweet moments, and to drink a beer with afterwards. @lmness Ilu4ever #yogateacher

Local designer, Ryan Tryate of Saywells Design, has designed every can. By the end of 2019, he will have created over 100 unique designs. Wowser.

You’ll find images with the iconic cans in a variety of wilderness locations online. They sure do travel.

Ready to support local and crack open a (gorgeous) can? Us, too.

Pueblo Vida taproom is located at 115 E. Broadway Blvd. For more information, visit pueblovidabrewing.com (or stalk them on Facebook and/or Instagram).

Where to get your fill of "trending" Sonoran sushi. It's a thing. Next post 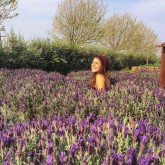 Kate hails from South Africa. Yes, you read correctly. After wrestling lions and riding elephant-back, she finds herself in the desert. Feel free to charm her with mimosas anytime.