FireTruck Brewing Co. is comin’ in hot with craft beer & a smokin’ menu

business is blossoming for the local brewery

It’s apparent that a lot of people love beer. As a matter of fact, there are roughly 9,000 microbreweries malting, mashing, boiling, and in the end, pouring their incredible creations out of taps in the U.S. All of these breweries are unique in their own right. You’ve got brewers coming up with funny names and bold labels to stand out in beer fridges, others are focusing on the craft in order to push past the boundaries of traditional beer, and some are doing both.

No matter the focus, every brewery has an origin story to tell, whether it be via taste, in its name, or the passion the crew has for delivering hoppy suds to the masses. Tucson is home to at least 20 breweries and even more local taprooms serving up their crafty beverages. In other words, you’ve got plenty to choose from in different areas of town, and FireTruck Brewing Company has been dishing out the goods at its midtown location for nearly 10 years.

The brewery, owned by retired and current firefighters, got its start for many reasons, but most importantly for the love of beer.

“Honestly, it was a little idea — kind of a hobby,” said Taylor Carter, CEO of FireTruck Brewing Company. “We started the business about 12 years ago and it’s just kind of grown from there. We opened up our actual first brick-and-mortar location in January of 2014, and we’ve been off and running since then.” Much like the changing of the seasons, Carter and co-owner Matt Gordon have been going with the ebbs and flow of business. Oftentimes, alterations are made to the structure of a business to better the movement of production, and sometimes things are changed — even the name — because it just makes sense.

In all the ways FireTruck Brewing Company eventually came to be, it is here to stay — axe-shaped tap handles and all. “A little over two years ago, we changed the name,” said Carter. “We had been talking to a marketing media company and of course, anytime we were in the news it always mentioned local firefighters. So, we just kind of realized it was silly not to have some sort of a firefighter-themed name and logo to go with it. It makes more sense.”

The new name didn’t change much of what many had come to expect when visiting the brewery, but there have been a few additions to the already popular beer menu. The Salida Del Sol — a Mexican-style amber ale with hints of caramel and toffee — remains one of the more popular brews on tap, but a few others are becoming “flagship material” these days. “We’re always improving our beers and putting out new ones,” said Carter. “We actually have a new one we’ve had for about a year now and it’s quickly becoming our No. 1 here. This is hard to do because Salida Del Sol still just crushes it everywhere. However, our Hotshot Hazy IPA is starting to give it a run for its money — it’s just a phenomenal hazy IPA.”

Tapping into the community

Much like the name of the Hotshot Hazy IPA, they’ll always have a connection to the firefighting community. It’s reflected in the beer they put on tap and also the support they’ve lent out to others throughout the years. Sure, you can’t necessarily put out fires with a chilled IPA or crisp lager, but you can definitely extinguish hunger and exhaustion by donating meals to those that could use one.

For instance, the Bighorn Fire in 2020, which was sparked by lightning near Pusch Ridge during monsoon, tore through the area and created a display for all to see. Sentinel Peak Brewing Company (the brewery’s name at the time) delivered multiple meals to crew members of the Mount Lemmon Fire District.

“Before I co-founded the brewery, I was a new firefighter who got my start at Mount Lemmon Fire District,” said Gordon. “During my time there, I was involved in fighting both the ‘Bullock Fire’ and the ‘Aspen Fire’ where many of my coworkers lost their homes and businesses. I learned a great deal about how close the ‘fire family’ is and how we can all support each other in times of need.”

Now, let’s dive a little deeper into the menu at FireTruck Brewing. It’s certainly something you shouldn’t overlook. I mean, it’s nearly impossible to not catch a whiff of what they’re cooking up when you walk into their open kitchen atmosphere. “So, we do have a freezer — it holds ice cream,” said Carter. “We try to make everything from scratch. We make all of our own sauces by hand. You know, our guacamole is made fresh daily and we really try to pride ourselves on being as ‘scratchy’ as we possibly can. And this is all while still understanding the economics that go into it. We don’t want to charge $25 for a meal, and we still want to make it very reasonable and enjoyable.” The menu is simple yet equipped with quite a few options.

The wings can be found on the “Firestarters” portion of the menu, which includes suggested beer pairings. These crispy handhelds are never fried and instead smoked to excellence. Like most places that offer wings, you’ve got options as well. Order them Naked, Mild, Hot, Carolina Gold, or Firetruck BBQ, and make sure to pair it all with a brew — the Icebreak IPA is what they suggest. If you’re craving another crew-recommended food and beer combo, then mosey further on down the menu. Just past the tacos, loaded nachos, and charcuterie board, you’ll find yourself in a land of sandwiches and massive amounts of cheese.

The Tri-Tip Sandwich, which is best paired with the Hero Dunkel, is a feast on its own. In between two slices of ciabatta, the smoked tri-tip is accompanied by caramelized onions, tomatoes, horseradish aioli, and provolone cheese. The provolone really glues it all together while you’re chompin’ down. Since we’re getting all gooey over cheese, we can’t forget to shine a light on the gourmet mac and cheese mash-ups on the menu. Pictured below is The Rusty Mac which comes with shredded barbecue beef, jalapeños, red onions, Rusty Truck BBQ sauce, cheese sauce, more cheese, and some bread crumbs to make it complete. The team behind the bar recommends the popular Salida Del Sol brew with this one. Oh, but there’s more. Take a look for yourself.

When production calls for a bigger space, it’s sometimes best to team up with others. Just a few months before the pandemic caused a stir with local businesses, FireTruck Brewing created a brewing headquarters with Borderlands Brewing Company. Behold Voltron Brewing Company. The downtown facility’s taproom was forced to shut down due to COVID but has plans to reopen soon. Meanwhile, FireTruck Brewing’s head brewer Adam Marshall and the crew are still pumping out enough beer to fill fridges in multiple taprooms and grocery stores around town. 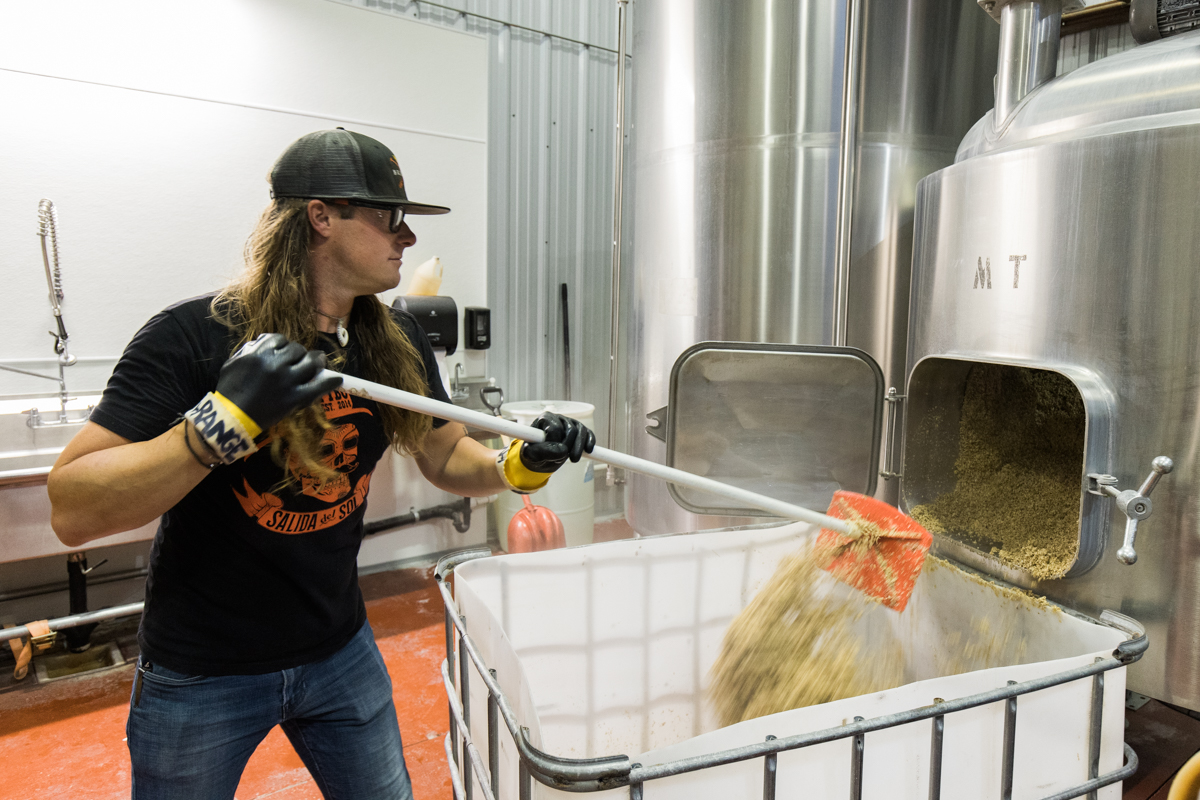 “We have other brands that are looking to join Voltron,” said Carter. “It’s a great facility. We all work together, cut costs, and give out really good craft beer. That’s the beauty about it — we work together. You know, we might be fantastic with certain things and then Borderlands might be better at it. So, we share our ability and knowledge to be able to make it all work.” Since its debut, the brewery has expanded even more and opened up two other locations — one serving the east side and the other pouring beers in Oro Valley.

Up next, there’s a new location eagerly waiting to join the battalion. Over on 800 N. Kolb Rd., the empty building that used to house Dry River Company will soon become FireTruck Brewing’s pizza concept.

“We are hoping to open up FireTruck Pizza Company in the next couple of months,” said Carter. “We’re excited. We’ve got a big brick pizza oven in there, and we already have our recipes dialed in.” In the meantime, take part in FireTruck Brewing’s Happy Hour, which is from 4 – 6 p.m. on Monday – Thursday. The discounted appetizers and $1 off all beers oughta put a smile on your face. Oh, and don’t forget they’re mixing up cocktails, too, for those craving something other than a brew.

Louie’s Cantina: Owners of 'Louie's Pub' bring the vibe to the east side Next post