The menu at Donut Bar isn’t the only thing that’s undergoing some change. One of the most notable updates at the downtown restaurant and bar is that it’s no longer a franchise; Donut Bar is now actually a local Tucson business.

One of the biggest takeaways that came from this change is the ability to refine the menu and make it their own. With that, new Donut Bar partners, Sean and Tiffany, came on board to help owners, Nick and Jessica, elevate the menu.

“We’re able to create any menu items that we want,” said Sean.

As a matter of fact, with the help and collaboration of local chefs, they’ve gone ahead and done just that. In addition to the giant menu of rotating doughnuts (about 30 different types daily), the new menu will feature savory options created by local superstar chefs. It was, as Sean put it, one big chef family affair.

So, buckle up and enjoy this visual tour through the wonderfully creative menu now available at Donut Bar.

Gary Hickey from Si Charro! Restaurants and Tucson Knife Fight was the mastermind behind the Si Charro Loco!

Chef Lindy Reilly of Thunder Bacon Burger Co. was the creative force behind the Mortadella Madness.

This sandwich features a large yeast donut that’s been griddled to perfection with Sriracha mayo, loads of grilled mortadella and American cheese, a folded scrambled egg, and then topped with a bourbon maple glaze and chopped candied bacon.

“Not only did he help with the sandwich — he helped with execution,” said Sean. “He helped shape the menu, not just the sandwich.”

If you’ve had the Snake Bite pizza from Ciao Down then you’re fully aware of how magnificent this grilled cheese is going to be.

Paul Reyes of Ciao Down, who happened to be opening his own brick-and-mortar spot in late October, found the time to create this beauty: A large yeast donut griddled with Sriracha mayo, smothered with American, Havarti, and Jack cheese, thick-cut bacon, fresh grilled jalapeños, and then topped with raspberry chipotle sauce, cream cheese frosting, and jalapeño bacon crumbles.

Don Rubino of Bawker Bawker Cider House drew inspiration from his Tomato Basil Craft Cider to create a grilled cheese that would pair beautifully with the sandwich. Who doesn’t love tomato soup and grilled cheese?

This grilled cheese starts with a large yeast donut griddled with butter and then topped with the perfect amount of Jack, American, and Havarti cheese, avocado, and a pesto spread. For just $1 you can add bacon to this beast of a  sandwich and pair it with a Bawker Bawker cider to get $1 off.

Oh, that’s right, you can now get Bawker Bawker ciders at Donut Bar!

WTF… Are You Nuts?

WTF… Are You Nuts? sandwich at Donut Bar (Photo by Isaac Stockton)

This burger is the brainchild of Sean Denlinger. Though Sean’s path led him to finance, his heart never strayed from his love of the culinary arts. That love is ever-present in this creation.

Want fries with that? For only $2 you can add an order of their house-cut fries to any sandwich.

Doughnut be surprised if you see other local chefs on the menu at a later time. There are plans to continue to expand with even more menu options and the space, too. More to come on that, but for now, check out their new menu and maybe pick up a few donuts for friends, coworkers, parents, or whoever! 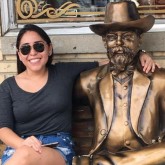 Addie Ibarra, native Tucsonan, is a fierce lover of adventure, travels, and Star Wars. Her love of food and drink takes her to places far, far away. In the days leading up to Valentine’s Day, co-owner, and executive chef Tyler Fenton…