In part three of our Tucson Tour de Taco series, we’re featuring taco joints along the west side of Tucson. While the Crispy Avocado Tacos are among our favorites, don’t be afraid to venture through Mexico’s other culinary regions at Seis via their handmade corn tortillas. Yucatan specialties Poc Chuc and Cochinita Pibil feature earthy and vibrant red achiote, while Puebla specialty Chicken Tinga features smokey chipotles. If you’re early, don’t miss out on the breakfast Chorizo con Papas Tacos with a glass of their blend of coffee and house-made horchata. Chicken is hardly the star at local taquerias, but Le Fresita West’s pollo is quite juicy. The lengua is also succulent, while the chorizo has crispy edges the contrast the soft bulk of it. The interior is lacking, but the quality ingredients more than makes up for it.

Although Juanito’s al pastor isn’t prepared the traditional way on the vertical rotisserie known as a trompo, it’s still packed with flavor from a variety of chiles with pineapple-citrus sweetness and acidity. The carne asada is also a local favorite. Entering and exiting the parking lot’s only driveway is a pain during traffic, but it’s worth it for the mesquite meats and gloriously-stocked salsa bar. The two-tortilla Taco Yaqui is topped with a roasted green chile, mesquite-grilled carne asada, sliced mushrooms, stringy white cheese, and crumbled bacon with a grilled Mexican green onion. The Taco Lorenza features a tortilla grilled until it’s dried and crispy like a tostada. FYI — their Sonoran hot dogs are also among the best in Tucson.

Keep up with Aqui Con El Nene on Facebook. 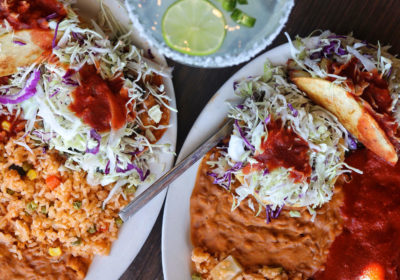