Downtown spot is inviting everyone to "come play"

Downtown Tucson is a hub for the city’s culture. It has a draw across the urban sprawl that makes up the Old Pueblo and the surrounding communities. With that distinction of “cultural center” comes the responsibility of generating and providing interesting and high-quality places to eat, which it does with aplomb.

Once upon a time, there was a place that fit both those bills and it went by the name Playground. After being temporarily closed for the past two-and-a-half years, rumblings of the restaurant and bar rising from the ashes have been setting off the seismic social sensors of various movers and shakers.

Happily, those rumors have become substantive. Playground is hosting its grand reopening on Friday, November 11 from 4 p.m. – 2 a.m.

“We are so thrilled to finally reopen Playground and bring more jobs back to downtown Tucson,” said Steve Bragg, general manager of Playground. “We have already hired over 60 employees, with some being returning staff, and we are so ready to welcome everyone back to play.”

Long has it been considered a downtown staple for over 10 years, it stands poised to become a new and improved fixture in the Congress lineup of restaurants, bars, and fun places to spend an evening downtown.

The fresh and talented team in the kitchen is going to be headed up by Executive Chef Griffin Armstrong of Little Love Burger and HUB Restaurant & Ice Creamery notoriety. Speaking of the kitchen, it has doubled in size thanks to construction crews who have been hard at work making sure it is ready to roll on opening day.

Playground’s remodel also includes new furnishings to the interior bar, rooftop bar, and bar cinema areas. If you’re in need of a good time, hang out in the main interior and rooftop bar for well-known local DJs, live music, salsa nights, and more. Be sure to wander over to the downstairs patio as well — the bar cinema will feature a more casual atmosphere and have classic ‘80s and ‘90s movies playing throughout the space.

A new selection of cocktails is on hand, alongside some new, elevated dishes like the delicious Tucson Eggrolls and delectable PG Mac Bites. The returning favorite and Playground signature dish Tostidos Locos is also back and better than ever. This meal comes in a bowl of tortilla chips topped with beans, cabbage, red onions, avocado crema, and chipotle mayo — toss some meat on it if you’re looking for something extra.

“This has been an incredible opportunity for me to build a delicious, new menu from the ground up,” said Armstrong. “Our goal is to offer food that feels familiar just in a much more elevated way.”

The combination of new dishes, cocktails, and scenery is sure to impress the veterans of Tucson’s downtown food and drink scene while bringing in new crowds. The menu is still in the final stages so keep an eye out online for the full lineup of dishes as we creep closer to the opening date.

“We are very excited to roll out the new menu, new bar bites, and some other good stuff,” said Armstrong. “It is completely reimagined from the original without losing any of the energy that made us a staple of the Down Town scene.”

While addressing his newly assembled hotshot kitchen team, Armstrong walked the line between a strong leader and an approachable person who stands ready to keep the food rolling and morale high.

If you want to be a part of the opening day festivities, be sure to be there a little early so you don’t miss out on the good times.

Again, the grand reopening is taking place on Friday, November 11 from 4 p.m. – 2 a.m. (kitchen closes at 11 p.m.) There will be no general cover charge or cover charge for bottle service, but if you’d like to skip the wait there will be a VIP line with a $20 cover.

“I wish Playground was around when I went to the University of Arizona – it has such a special energy,” said Christina Rosete of Loveblock Partners. “When it first opened 11 years ago, the goal was to create a space where adults could play and have fun. Throughout the years, Tucson has embraced our fun-loving philosophy and made lasting memories.” 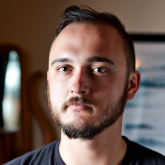 Tucson-based photographer and videographer with a penchant for photographing people, puppies, and pizza.