In the Spotlight: Local restaurants & chefs recognized nationally in 2022

It’s a real pleasure living in Tucson. The winters aren’t as cold as in eastern states, the city doesn’t ever really experience many natural disasters, and the culinary scene is incredible. We Tucsonans already knew that but others around the globe are realizing it, too. The online publication The Manual recently released an article about “the best places for foodies to visit” and Tucson was the focal point of the piece. The website noticed that Tucson is a “distinctive intersection of history and regionality” and they even interviewed Barrio Bread’s Don Guerra.

“Our rich culinary heritage spans nearly 5,000 years and a border that encompasses distinct Mexican and Native traditions in both food and drink,” said Guerra. “For that reason, the flavors and ingredients that are present in Tucson’s culinary scene are unlike anywhere else.”

Below is a roundup of a few restaurants and chefs that were recognized on a national level this year. Also, the year isn’t over yet so you can count on more being added to the list. A look inside the kitchen at BATA

A very welcome addition to downtown Tucson, BATA is an innovative, modern, upscale gastronomic restaurant by our very own native Tucsonan and self-taught chef Tyler Fenton. Inspired by a modern European approach, where the focus of a dish is often on the beauty and quality of the ingredient itself, BATA enriches the Tucson dining scene with fire and finesse. In October, the restaurant earned some national spotlight by being recognized as one of Bon Appétit’s “Best New Restaurants of 2022.”

Read our September 2022 article “This must be the place: BATA named one of the Best New Restaurants in America.“ B8 and B4 burgers at Beaut Burger (Credit: Jackie Tran)

It’s not impossible to make a delicious veggie burger from scratch — one that even the eaters of the meatiest burgers would enjoy. When it comes to the vegan patties sandwiched between two buns at Beaut Burger, they’re ready to take on the competitive world of store-bought burger options.

Here in Tucson, the locals already know this but now the restaurant is earning national attention and being named one of the “Best Veggie Burgers in America” by TastingTable.

Read our September 2022 article “Beaut Burger named one of the Best Veggie Burgers In America.” The world got a taste of Tucson with BOCA’s chef Maria Mazon throughout Bravo’s previous season, but this year the program, “Top Chef: Houston,” went all-in for a full course. Carlotta Flores, who’s the executive chef and owner of the Si Charro! restaurant group, and Don Guerra of Barrio Bread joined the table of judges during the season’s final two episodes. In addition, the competing chefs visited Mission Garden to gather produce before their big meals.

It’s been a banner year for Flores, who’s currently celebrating the year-long 100th Anniversary of El Charro Café while making appearances on other networks, and opening a new concept — downtown’s The Monica.

Read our May 2022 article “From Houston to Tucson: ‘Top Chef’ pays a visit to the city & El Charro Café.” The downtown Si Charro! restaurant concept is featured on the first Discovery+ episode of “Taste of the Border,” which premiered on Cinco de Mayo. During the visit to Tucson and inside downtown’s Charro Steak & Del Rey, Claudia tackled quite a few signature dishes presented by executive chef Gary Hickey — things like Charro Escargot, the Lobster Tamalada, and the Charro Burger and fries. This year, Don Guerra took home the gold with a James Beard award. The craft baker has learned to respect its power while staying open to its possibilities. Case in point: his campaign to help revive White Sonora wheat, a heritage grain few people knew existed before Guerra began popularizing it in his artisan Barrio Bread, much less that it could be grown in Southern Arizona. Food & Wine magazine named Eegee’s the top quick-service restaurant in Arizona in its “Best Fast Food in Every State” list.

“When the weather heats up in Tucson, which is quite often, locals reach for the frozen fruit drinks sold at this iconic regional chain, started in the 1970s when two entrepreneurial youngsters started selling icy lemonades to overheated college students,” Food & Wine shared. “Then came sandwiches, and then came lots of locations around town; a 2019 sale appears to have lit a fire under the classic brand, which has now expanded to Phoenix, bringing the eclectic menu to a whole new audience.”

Read the full article at foodandwine.com. Local chef Kyle Nottingham made his debut on the TBS television show “Rat in the Kitchen” on Thursday, April 14.

Nottingham, who’s also a partner at Ares Collective — Prep & Pastry, Commoner & Co., August Rhodes Bakery, and Flora’s Market Run — has made television appearances in the past, including “The Kelly Clarkson Show,” but was especially excited for everyone to see this experience.

Read our April 2022 article “Chef Kyle Nottingham shows off his skills on the TBS TV show Rat in the Kitchen.” “Take his seafood stew, inspired by chilpachole, from Veracruz,” The New York Times shared. “It starts with a deeply savory tomato broth infused with tostadas; shrimp and plush masa dumplings float throughout. Other dishes center on grilled meats, often served with not much more than a brightly seasoned salsa, local vegetables, and herbs. How did he get something so straightforward to taste this remarkable? Often, the best restaurants are the quiet ones.” Feng-Feng Yeh organized the Tucson Chinese Chorizo Festival with locals Jackie Tran, Mario Mazon, Forbes Meat Co., and others. The festival and Feng-Feng’s story were featured nationally by AP News, which was then distributed to several news outlets around the U.S. Yeh was an executive chef in New York City when the shutdown took away her job and career plans. She pulled up stakes and moved back home, turning instead to her passion for public art.

Read the full article at nbcnews.com. The publication VegNews recently released its “23 Best Vegan Mexican Food Spots Across the U.S.” and Tucson’s beloved Tumerico made it in the top 10 of recognized restaurants.

The vegan spot is actually the only Arizona restaurant that made it onto the meat-free list. Tumerico, which got its start as a pop-up at the Heirloom Farmers Markets, has been feeding vegans, vegetarians, and even folks that love eating meat for a few years now.

Read our October 2022 article “Tumerico named one of the ‘Best Vegan Mexican Food Spots’ in the U.S.“ 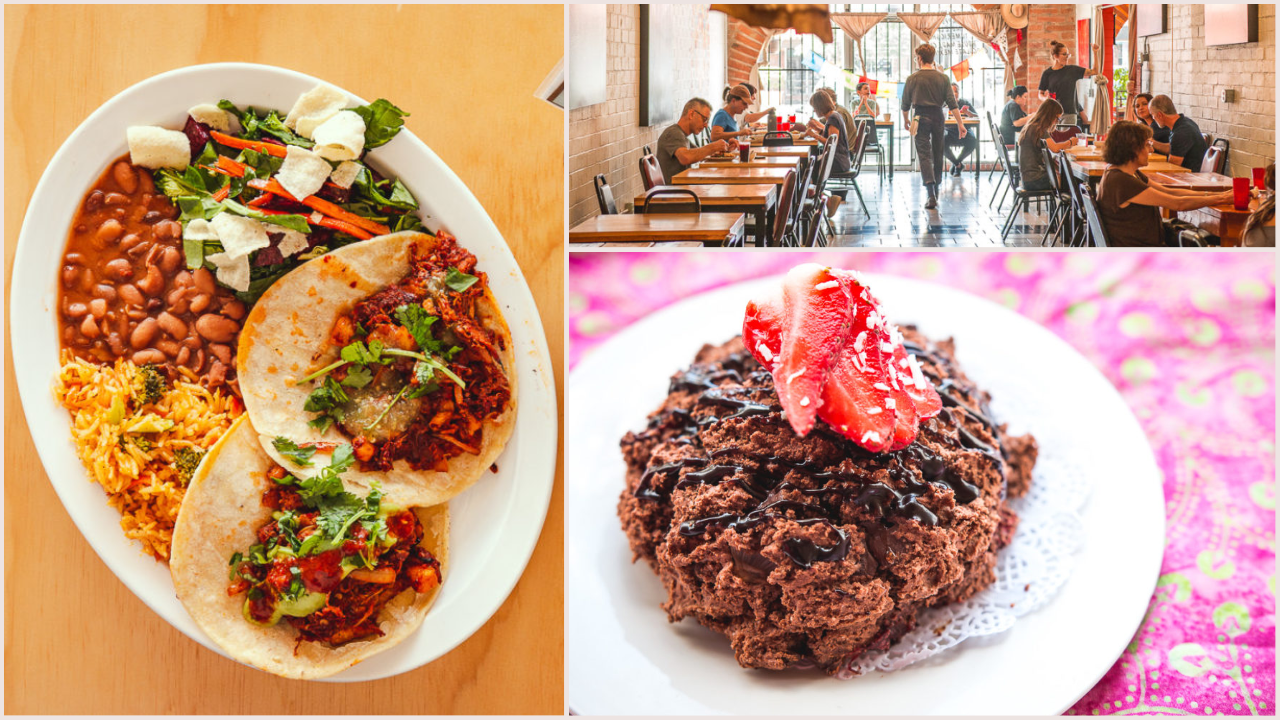 This article came out right before Earth Day. Before the holiday, the folks with Yelp have been busy collecting their Top 100 Vegan Restaurants in the U.S. and Canada. To no surprise, a couple of Tucson spots are included in that impressive gathering.

Tumerico is listed as third on the list of 100 spots across the country, and Urban Fresh is their 27th favorite spot to grab a vegan or vegetarian dish. Right before Valentine’s Day, OpenTable revealed the 100 Most Romantic Restaurants in the U.S. and Tucson’s locally-owned Vivace made the cut.

Daniel Scordato’s longtime Tucson Italian food staple, Vivace Restaurant, came to fruition back in 1993, and his last name is something that’s been recognized in the Tucson food scene for decades. The restaurant overlooks the city and the combination of the twinkling lights at night and the delicious bites from the kitchen are enough to make anyone’s heart flutter.

Read our February 2022 article “Vivace named one of OpenTable’s 100 Most Romantic Restaurants in America.” The online news and culture platform, UPROXX, recently published a roundup covering “The Single Best Bottle Of Whiskey From Each Of The 50 States.” Here in Arizona, Whiskey Del Bac took home the gold with its Dorado American Single Malt.

“The nose is full of chocolate tobacco with a hint of dried ancho chili, old cedar bark, and whispers of a crackling campfire in the high desert,” UPROXX shared. “The palate has a mild tannic vibe with a dash of espresso bean and vanilla next to soft toffee with a hint of an almond shell. The end leans into that campfire smoke with a dash more of that chili pepper before the cedar and choco-tobacco merge on the finish.”

Read our September 2022 article “Whiskey Del Bac recognized as the ‘Best Whiskey in Arizona’ by UPROXX.“