It’s hard to say with certainty that the Wolverines of West Potomac High and the Eagles of Thomas Edison High are rivals in Alexandria, Virginia, but the real rivalry will take center stage in Tucson next month when two of the neighboring schools’ alumni battle it out for the title of Iron Chef Tucson.

Local chefs Wendy Gauthier and Ken Foy grew up less than a mile away from one another in Northern Virginia, graduated in the same year from schools that only U.S. Route 1 separates, cooked at area restaurants, and relocated to Tucson to further their culinary careers. And to magnify the mystery, the chefs didn’t actually meet until just a few years ago, and they currently live on Tucson’s southeast side — wait for it — across the street from each other.

This is either one of the greatest coincidences of our time or stalking at its best. Either way, expect this to be a battle of epic magnitude on Saturday, July 30 when Casino Del Sol’s Grand Ballroom will be transformed into Kitchen Stadium.

Foy, the owner/chef of Dante’s Fire, 2526 E. Grant Road, emerged the victor from the Iron Chef Tucson’s semifinals earlier this week. He was no stranger to the qualifying competition, with a few previous attempts under his belt, and suffice it to say that he showed up hungry for the hardware this year.

“We’ve always been eager to compete, but for whatever reason, we just haven’t been able to advance,” said Foy. “We’ve wanted this for a while, to prove to ourselves that we’re as good as we think we are.” Foy hesitated to define his cooking style and culinary point of view, noting that he doesn’t “pigeonhole very easily,” pointing to his Dante’s Fire menu as Exhibit A. “We have dishes from Southeast Asia, to local Sonoran cuisine, to seafood from my east coast roots, to beyond; it’s about redefining approachable foods and putting a Dante’s twist on food that people know.”

And twist he does. His winning dish at the semifinals event was a manifestation of this philosophy.

He and his team plated medallions of Corned Pork Shoulder, brined with cinnamon, coriander, and star anise, with a horseradish potato salad, pickled eggplant, and a sweet pea coulis. The otherwise pedestrian corned beef might not have worked for Foy in this moment, and pivoting to another protein, which may have earned him bonus points in the creativity category, speaks to the twists he keeps up his sleeve. So what was it like when his name was announced as the winner among five of his culinary colleagues who also showed up with the same vision of victory?

“I was shocked because the quality of chefs in Tucson is second to none, so I knew it was going to take a herculean effort just to get near the top let alone to win,” said Foy. “I thought, as in years past, that I’d be watching someone else celebrate while I’m packing up my stuff.”

The moment that Foy’s name was announced, the first hug that he received was from Wendy Gauthier herself, Tucson’s reigning Iron Chef, with an embrace that was strong enough to build a bridge from Northern Virginia to Southern Arizona. “There is nobody who I respect more, and who I’d rather go up against in the finals, than Wendy,” he said. “With our similar backgrounds, we speak the same language, so to speak, so it should be interesting to see how our mutual histories ultimately come out in our food.”

Gauthier, owner/chef of Chef Chic, 1104 S. Wilmot Road, is as enthusiastic about meeting Foy in the battle zone as he is.

“All the chefs who competed in the semifinals are amazing chefs, and seeing their dishes that night showed me that any of them could win this,” said Gauthier. “But I was so excited that Ken won, and thought it was hilarious that two kids from Alexandria, Virginia are going to be competing against each other.”

What Foy will be competing with is a similar style of versatility, with both a catering program and a café that requires Gauthier to “do something different almost every day.”

Whether this is Chef Chic’s Roast Beef Pho Sandwich with a jalapeño mousse and hoisin vinaigrette, which she says “takes that big bowl of pho and turns it into a sandwich,” or her lineup of grab-and-go meals ranging from chicken and dumplings to duck breast with cherry glaze, the key to success for Gauthier is her skillfulness in meeting a myriad of needs from her clients and customers.

With her Iron Chef victory in 2019, and two additional years to relish the moment and extend the reign because of the event’s pandemic-forced pause, Gauthier knows what it takes to win. However, she admitted that she and her team need to be “beyond our A-game, because Ken is an amazing chef and we need to make sure that we’re coming up with the kind of dishes that start by knocking our own socks off.” What advice does Gauthier have for anyone with dreams of competing in Iron Chef?

“Don’t be as nervous as I was the first time, try to breathe through it, and don’t look at the clock,” she advised. “The one hour that you’re given to prepare and plate four courses with the secret ingredient goes by in a flash, you just need to keep cooking and listen for the time announcements.”

Okay, Ken, you can open your eyes.

The Iron Chef Tucson event will be on Saturday, July 30, at Casino Del Sol. The program will begin at noon with a “Culinary Experience” that will showcase a variety of food and beverages from restaurants across Southern Arizona, cooking demonstrations, kitchen gadgets and other household items, barbecue grills, and more. The main competition will begin at 5 p.m. 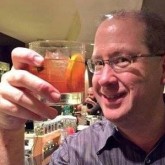 Matt Russell has been a food and beverage writer/broadcaster covering stories in Arizona and beyond since 2009. He's been the food and beverage writer for Inside Tucson Business for the past decade and is a regular contributor to Tucson Foodie and Tucson Weekly. He's also the food and beverage correspondent for the Bill Buckmaster Show and appears regularly on Wake Up Tucson. Matt serves as a judge at local and national food and beverage competitions throughout the year. These have included Iron Chef Tucson, Agave Fest, Tucson Taco Festival, World Margarita Championship, Southern Arizona Salsa & Tequila Challenge, Cookies & Cocktails, the Tucson Firefighters’ Chili Cook-Off, and the Nugget Rib Cook-Off, the largest BBQ rib competition in the United States. When he’s not on the radio, writing his column, or serving as master of ceremonies at community events, he’s running Russell Public Communications, a public relations agency he founded in 2002